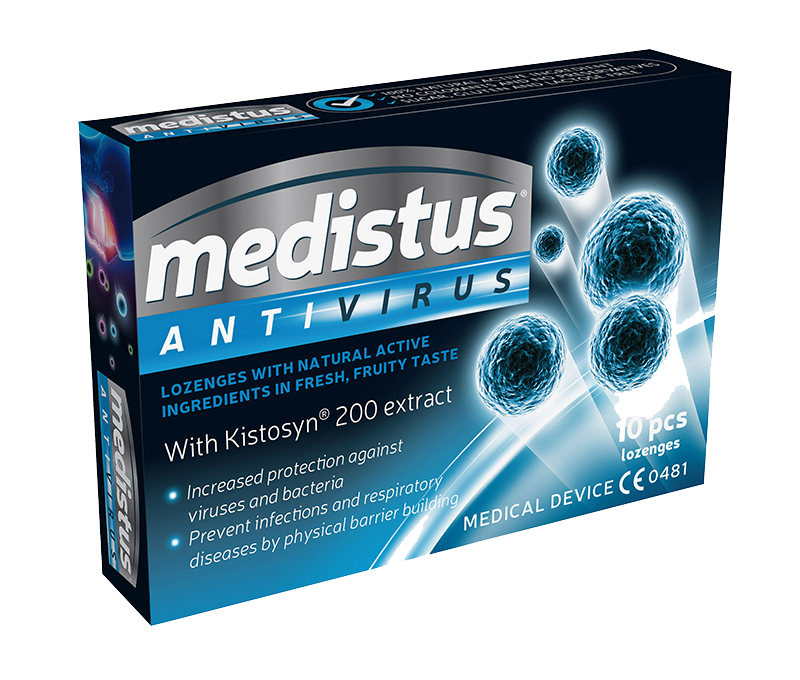 WHAT DO MEDISTUS® ANTIVIRUS LOZENGES CONTAIN?

0481). Efficacy and safety have been tested according to the European Medical Device Directive (93/42/EEC). 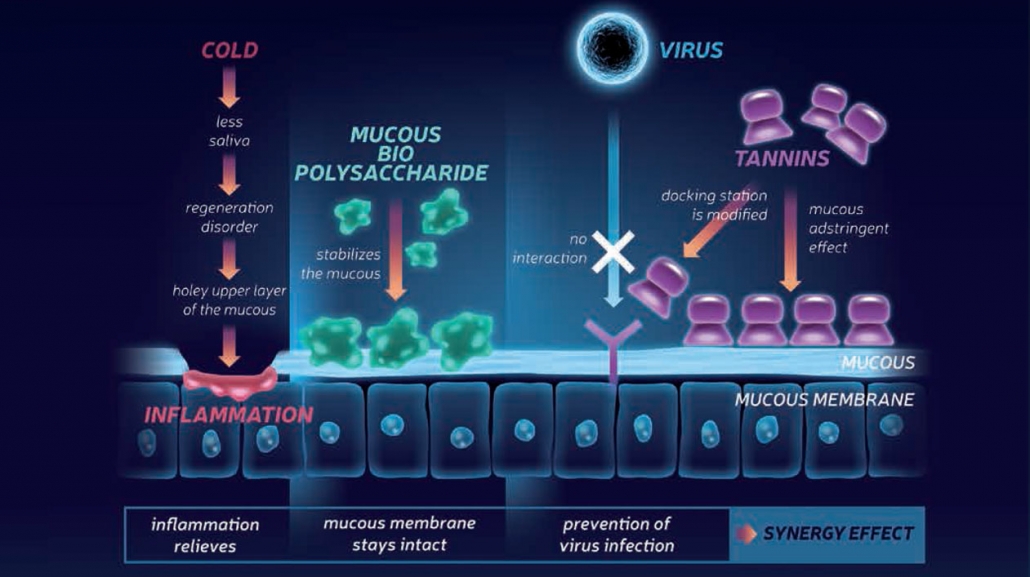 Medistus® Antivirus is a novel medical device with an active ingredient complex containing plant-based substances. The Kistosyn® 200 extract forms through its natural active substances a protective film over the oral and pharyngeal mucosa. This protective barrier leads to a physical (mechanical) protection against viruses (cold viruses) and bacteria, which helps prevent their penetration into body cells and their further propagation. The Kistosyn® 200 extract supports through its natural active substances the barrier function of the oral and pharyngeal mucosa by forming a natural film on it. As a result, external irritations can significantly be reduced. In addition, the Kistosyn® 200 extract supports the protection of the oral mucosa from inflammations and thereby the alleviation of cough and dry cough. Due to this physical effect resistance development is not possible. 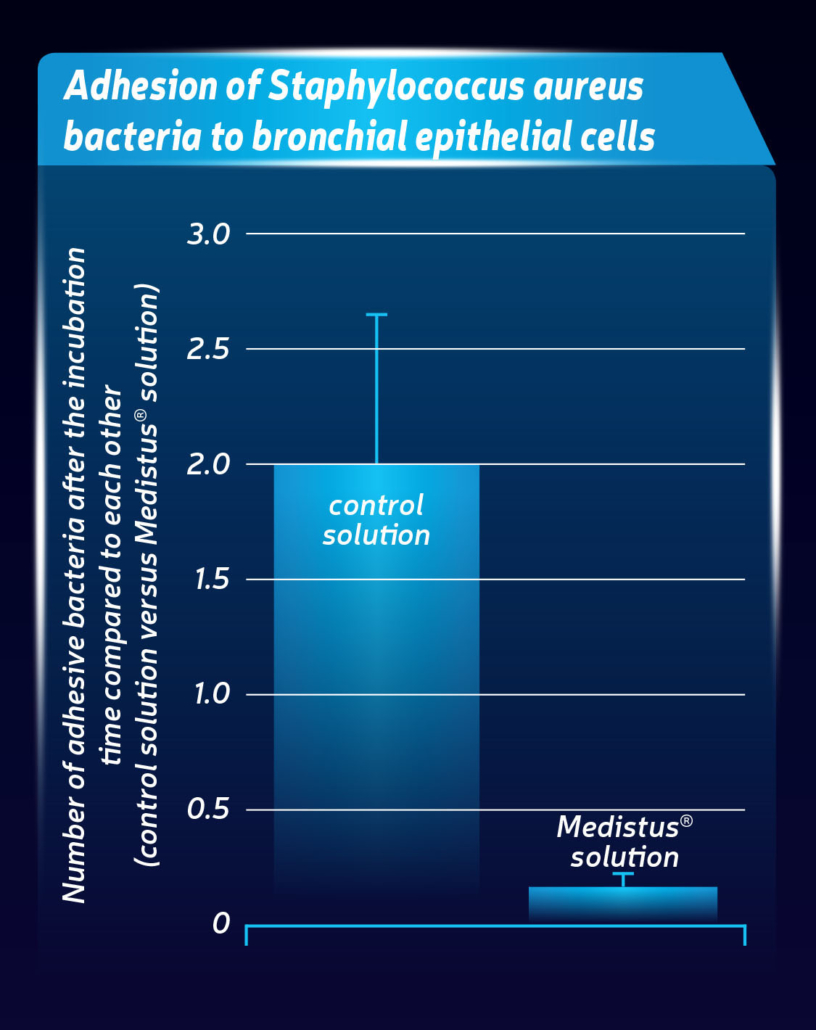 In vitro tests were performed on the adhesion of Staphylococcus aureus bacteria to bronchial epithelial cells. It was investigated whether Medistus® Antivirus lozenges affect the adhesion of bacteria to cells, resulting in preventing or reducing the infection. For this purpose, one line of cells (BEAS-2B human bronchial epithelium) was incubated with bacteria (2.9×106 CFU / ml – 3.0×106 CFU / ml) for an hour with the solution of Medistus® Antivirus lozenges, whereas another line of cells and bacteria did not receive any treatment. After the test period and the rinse of the nonadhesive bacteria, the number of adhesive germs was determined by the lysis of the epithelial cells.
Result: On the cell layer treated with Medistus® Antivirus solution, the bacterial adhesion decreased by 95% compared to the untreated cell layer. 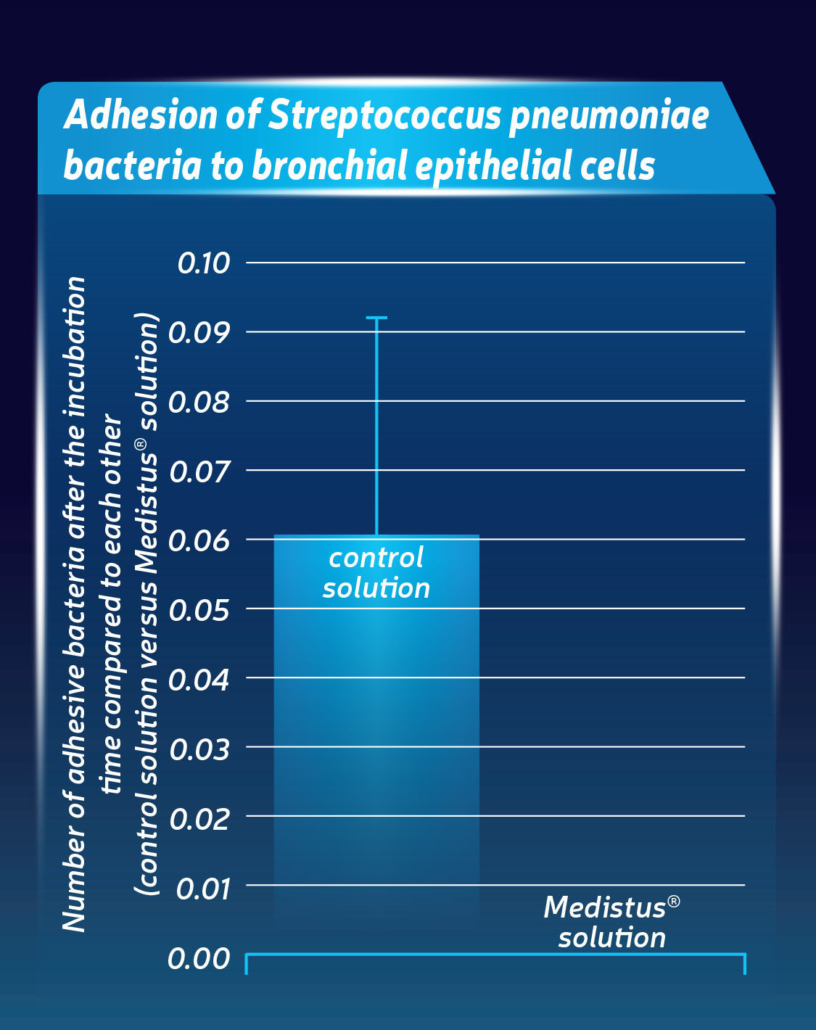 The same method was used to test the adhesion of Streptococcus pneumoniae bacteria to bronchial epithelial cells. The initial germ number used for the incubation was set in this case to 1.7×106 CFU / ml – 1.9×106 CFU / ml. The determination of the number of adhesive germs after the test period delivered an outstanding result.
Result: On the cell layer treated with Medistus® Antivirus solution, no living streptococcus bacteria could be detected after the one-hour incubation.
The test results clearly indicate the powerful effect of Medistus® Antivirus lozenges in inactivating bacteria. 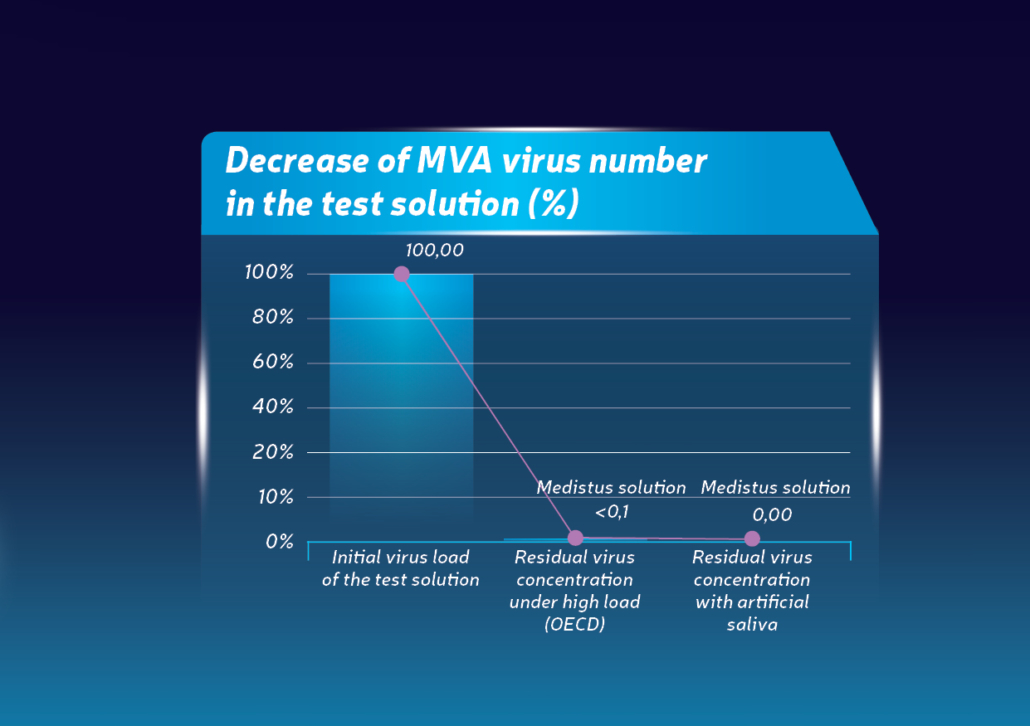 The antiviral activity of Medistus® Antivirus lozenges has been demonstrated in several previous in-vitro tests. In 2020, the virucidal activity of the lozenges was tested against the MVA virus in accordance with the requirements of DIN EN 14476 by an accredited laboratory in Germany.4
The Modified Vaccinia Virus Ankara (MVA) is a type of vaccine virus which was developed in vaccine research. It is widely applied as a surrogate virus representing all enveloped viruses to replace these in in-vitro tests. Enveloped viruses include any virus that is surrounded by a lipoprotein envelope (peplon) that makes viruses more resistant to environmental influences and helps them adapt to the host cell. All viruses which pose a threat of global epidemics affecting the human population, are enveloped viruses such as influenza viruses, herpes viruses, HIV, ZIKA, Ebola virus, and SARS coronaviruses (SARS-CoV).5
The purpose of the in vitro test was to verify the effectiveness of Medistus® Antivirus lozenges against enveloped viruses causing upper respiratory infections under laboratory conditions. The MVA virus used for testing is a generally accepted surrogate in professional communities and official bodies as surrogate virus for enveloped viruses.6
During the laboratory test, the solution of the soft lozenges mixed with artificial saliva was tested by two methods. First, by the so-called “Clean conditions” method, in which the virucidal effect of the test substance is measured without adding interfering substances. The other applied testing method was the test according to “OECD conditions” which is performed under high load conditions by adding proteins, mucin and yeast to the test solution. The inclusion of proteins and yeasts pose an aggravating testing condition. It interferes with the mechanism of action of Medistus® Antivirus soft lozenges by reducing its efficacy, yet producing results close to real ‘in vivo’ conditions.
The number of residual viruses was counted in the same intervals in both test methods. In the “clean conditions” method, the virucidal effect of Medistus® Antivirus soft lozenges were clearly confirmed in only 5 minutes. It reduced the initial virus load by 4 log10 and inactivated all viruses. Under OECD conditions with high protein, mucin and yeast load, Medistus® Antivirus reduced the original virus concentration by 3.5 log10 after 5 minutes and by 3.67 log10 in 10 minutes. This translates into a virus load reduction > 99.9% in 10 minutes contact time.

These test results clearly support and confirm the antiviral effect of Medistus® Antivirus lozenges against enveloped viruses that may cause epidemics.

Keep out of reach of small children. Suitable for children older than 6 years.

There are no side effects known.

There are no counter indications known.

To avoid interactions, in case of taking medicines internally, please leave a pause of 2 hours between the intakes or consult your doctor.

The Medistus figurative trademark and the Kistosyn word trademark are registered international trademarks of Vitaplus Ltd.

For more information about the product and for medical information
please write to: export@vitaplus.hu or call us at: +36 1 239 0432.

Go to top
Scroll to top